Happy New Years to all of you! I hope you are each ready for 2018 – I’m still trying to figure out where 2017 disappeared to. I might have skipped today’s blog post, but it’s already been almost a month since I last posted one on this site, so I thought it would be better to do a “short” post rather than wait another couple of weeks!

Holidays and visits to and from family are certainly part of why I’ve been absent from writing for so long, but there has actually been another big distraction for the last few weeks – I’ve been redoing my personal library.  I knew it would be a big task, I really did. But, whew, now that we’ve been working on it for so long, I’m not sure we really had any idea just how big it would be. (And on more than one occasion I did wonder what we were thinking!)

Do you have a Personal Library?

But, before I get into more about that, I would like to ask – how many of you have personal libraries? Since most of the readers of this blog are homeschoolers, I hope that most of you can answer yes to that question! I realize that here in the twenty-first century we live in a digital world that didn’t exist when I started homeschooling over thirty years ago, but there is still something very special about “real” books that sit there on a shelf, reminding you they are there and that they are meant to be used.

A Long-time Love Affair with Books

I’ve always loved books – I can credit my parents for implanting that love many decades ago. And it is a love that I have strived to pass on to my children. (Games and books have been the largest category of gifts in my family for as long as I can remember.)

And as a homeschooler, I really can’t imagine not having had a personal library all those years that I was educating my own children. We happily moved thousands of books across the world and across the country as the Army moved us from place to place. In fact, when we were heading stateside from Germany, we started to worry about our weight limit, and we were willing to get rid of furniture if need be, rather than get rid of any of our books. My best guess puts my library at about 7,000 books when we moved into our current home and converted the “formal dining room” into a library. My husband graciously filled three of the four walls with wall to wall, floor to ceiling bookshelves.

As my homeschooling came to an end, I started trying to purge my books, though I don’t think I’ve managed to shrink my current holdings to much under 5,000 books.

When I closed my physical store at this time last year, we chose to keep more than a dozen of the bookcases that had graced the walls of Creative Learning Connection for the previous decade. But for the last year the shelves have sat in our storage unit awaiting the time and energy to put them back to use. So several weeks ago I decided the time had come to bring the brown bookcases over and replace the white shelves that had served our needs for so long.

It was mid-December and company and holidays were just around the corner – but my son had some time off between semesters and I wasn’t going to get a better opportunity to do this! To increase the chances we wouldn’t change our mind – I scheduled someone to come clean our carpets on December 15. So we were committed. We had to remove thousands of books, so that my son could then remove the dozens of shelves that were already there.

Several students helped remove and box some of the books on Wednesday, and Thursday three of us worked until late into the night (or early into the morning) to finish the task. But we did it! We cleared out the room, the carpets were cleaned and the following week we were ready to reverse the process. 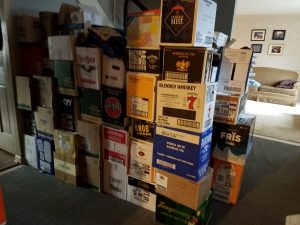 It’s a good thing the Liquor store gives away free boxes! This is NOT all of the boxes either.

Of course, removing the books and the shelves was actually the easy part. The next week, the fun really started. I determined I had space for seven bookcases in the library. The problem was that our brown bookcases were actually two different styles – so in order to get seven that matched, we had to get three of them from the storage unit, and then also trade for the two in the office and the two that were in my second floor bedroom. And, of course, the four that were already in the house were already full of books and/or games! So before those could be moved they had to be emptied.  My son and two of his friends brought over the bookcases we needed from the storage unit (including two to replace the ones in the office – the bedroom replacements will have to wait until this part of the project is completed.) Meanwhile my daughter and I were removing books and games as quickly as we could.

Is the End in Sight?

By the end of Monday the bookcases were in place in the library. The shelves still had to be installed, and then 100 or so boxes had to be emptied. Two weeks later, we’re approximately half way through the process of installing those shelves and putting the books in their proper places. (If I’m going to all this trouble, I want my books to be more or less organized!) 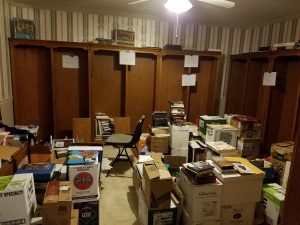 I think this is where we were in the process a week ago.

We’re not where I had hoped to be by today, but we’re getting there. I have knee surgery scheduled for January 10, so finishing before then is the new target. (We’ve already missed the before Christmas company deadline.) In the meantime, we try not to trip over the stacks of boxes and books that really are shrinking!