The neat thing about sharing Shakespeare with students is that there are so many ways to do it.  My favorite method is still to read an entire play aloud as a group, and as often as possible to combine that with watching a live performance of the play. Which is why I’ve finally decided to start this school year with The Taming of the Shrew: American Shakespeare Center’s traveling troupe will be performing it in our area in early February, so reading it this fall will make for a fuller experience for all of us. (By the way, the feature image for this post, as well as all of the other images except the last, are different scenes from The Taming of the Shrew.)

But after attending two different teacher/adult events in Staunton, Virginia (home of the American Shakespeare Center) I’m working on how to add a little variety to our readings.  Here are some of the ideas from their recent teachers seminar that I am considering adding to this fall’s lesson plans:

Different Ways to Read a Line

Who Are Lines Directed at?

What Would You Cut?

And those are just some of the exciting ways we learned to make experiencing Shakespeare with students even more exciting than I’ve already found it to be. The wonderful thing about these ideas and the ones I’ve shared in previous posts is that sharing Shakespeare doesn’t have to be all or nothing.

And while I still have a personal preference of having students experience plays all the way through from beginning to end, I know that doesn’t work into everyone’s schedules. My plan for the fall is to work many of these different ideas in as we read through our next play, but I can also see how some of them would be useful even if you just had the time to do a scene or two with students.  With Shakespeare, I may believe that more is generally better, but sometimes you just need a good place to start.

The Play’s the Thing

For more details on these and many other great activities, I can highly recommend the American Shakespeare Center’s Study Guides.

I plan to report back later this fall after we’ve tried out some of these activities in class. Regardless of what we think of each one, I’m confident we’ll still agree with Hamlet that “The play’s the thing.” (Even if he was talking about catching the conscience of a king with it and we’re “merely” trying to immerse students in the wonderful world of Shakespeare!)

Okay, so this wasn’t quite the type of camp we had.

In last week’s posts (here and on CatherineJaime.com) I mentioned two of the many ways we experienced Shakespeare at the No Kidding Shakespeare camp I recently attended. A camp for adults, who knew?

My Methods for Sharing

Today I will share several others. But first, I want to reiterate a couple of things from my first post on Sharing Shakespeare: in the twenty years that I’ve taught Shakespeare I’ve settled into a fairly simple way of sharing Shakespeare with my students – passing out characters in order to read the plays aloud together, and watching the plays (live and on video). There are distinct advantages to both the reading and the watching, and over the years I’ve done both, sometimes starting with one and sometimes starting with the other. (Though last year I had an unusual group of students – they didn’t want to spend any of our class time watching plays – they were enjoying the reading too much! Since this group included a couple of young men with no prior experience reading Shakespeare, I was not going to argue!)

Enough Comedies, Tragedies, and Histories to last a LONG time!

Overall, I have found that method to be very successful – I have introduced countless students to the wonderful words of the Bard that way. And I certainly won’t be making any major changes this year. (The one year I tried a major shift got off to a really bad start, until I went back to the tried and true.) But what I do plan to do is work in a few of the activities we did at camp around our reading – starting or ending several class periods with an activity that relates to that week’s class. That will mean spending more time on one play, but I have no problem with that. Years ago we had a three and a half year push to read every one of Shakespeare’s plays aloud in class, but since then we’ve settled for making our way slowly through some of the best. (Reading each play was a great accomplishment, but it is certainly not for the faint of heart!)

But, with no further ado, here are some of the other neat activities we did at camp that I’m hoping to incorporate this fall:

For this activity we each received a line from a play and then had to walk around the stage reciting the line as we followed different instructions we were being given – walk faster, walk slower, speak the line faster, speak louder, those types of things. I think the idea there was for us to become comfortable with our line, and to experience it in different ways. 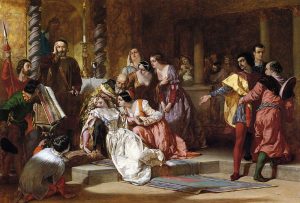 A scene from Much Ado

Then we paired off with the person closest to us. We were to instruct our partner to stand in a pose that somehow went with our line. The challenge was that we were not supposed to talk to our partners, nor touch them – we were supposed to get them into position with merely the suggestion of our hands. And I’m sure my students will give me the same blank looks that you’re trying to give me right about now. (It’s definitely something that’s easier to explain through showing than through words, so you’ll just have to take my word for this portion.) Once each partner was in position they were given the other’s line to speak. As half of the group stood as” speaking sculptures,” the other half wandered around and looked and listened. Then we swapped places and repeated the process.

“Forming” the sculpture was indeed a challenge. But it was interesting to wander around and listen to the different lines. I hadn’t recognized my own line or my partner’s line, but as I moved from sculpture to sculpture I did recognize some of the others as being from Much Ado About Nothing. It turned out all of them were from Much Ado.

A rendition of Taming of the Shrew

I’m thinking that might be a fun way to introduce whatever play we’re starting with this fall. (Sadly, I’m still deciding which one we’re going to do first – so many good ones to choose from – so I can’t start getting lines prepared for this quite yet.) One of the plays the American Shakespeare Center folks will be bringing to Huntsville in February is Taming of the Shrew, so it’s at least in the running for our first play of the semester, depending on how long ago we last read it.

Once I have our first play chosen, I can pick lines for the students to practice speaking and sculpting. I wonder if they’ll be able to figure out which play it is any faster than I did.  Time will tell!

Snapshots of a Scene

For another one of our activities we were broken into small groups, each with a portion of a different scene. Each group had the same number of people as their scene had characters.  As a group we had to choose five places from our scene that we could take “snapshots” of  – where we could  quickly “act” them out (more of a posed three-dimensional picture for each place.) The idea was to visually represent the highlights of our little scene.

I’ve never considered myself much of a drama person (I know, I know, I teach Shakespeare, but that’s different!). But I really enjoyed the various activities we did like this one.

Another time we were in similar small groups with a different short passage. We were instructed to start by reading aloud our passage (adding limited movements if we wanted). Then  we had to read it again several times, varying the tempo and emphasis of individual portions as we read. We could see (or actually, hear) what the small changes we made to our reading did for the overall feeling of our section.

Using These in Class

I don’t want to turn my Shakespeare classes into acting classes – plenty of others already offer those. I want to keep my emphasis on reading and enjoying Shakespeare. But I can see how these types of activities, sprinkled sporadically amongst our readings could add a new dimension to our Shakespeare understanding and enjoyment.

I’m not sure if I’ve shared about all of the great activities we did at camp yet. (I still haven’t gotten home, unpacked from that trip, and relocated my notes!) But either way I should have more to share within a week or two. I’m planning to go back to Staunton to attend their Teacher Seminar. in early August. Hey, we’re on a roll here! Maybe by then I can nail down which play(s) we’ll be tackling this fall and start figuring out where to work in these various, fun activities.

In the meantime, if you are already planning to share Shakespeare with your (older) students next year, I hope these different ideas are helpful. And if you’re aren’t, maybe you could reconsider. Overall, I’m a big fan of middle school and high school students spending lots of time with Shakespeare, but not so keen on younger students being exposed to his work. Adult themes permeate these plays, and I don’t see the benefit of sharing those with our youngsters quite yet, but maybe that’s just me. Some of my students have enjoyed Shakespeare with me for as many as four or five years. (What can I say, I don’t think they can get too much Shakespeare!)

Remember, as Hamlet said so many years ago, “The play’s the thing.”